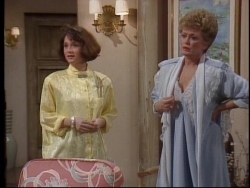 My in-laws were visiting so I wasn't able to get this up on Sunday, but it's here now!
Also Facebook targeted ads hit me up with this: 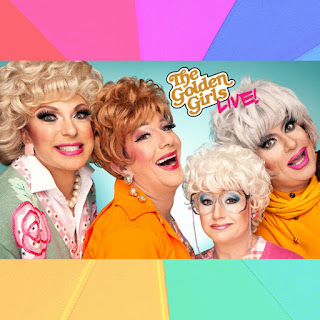 Tickets!!
During last week’s episode I kept making comments that Charlie, Rose’s granddaughter, was obviously related to Blanche. This week we actually get a relation to Blanche.
We open on Sophia putting cotton balls between her feet to paint her toenails. I am thoroughly disgusted because feet are gross and I have no desire to see Estelle Getty’s. Blanche comes in just as disgusted as I am. She tells Sophia Lucy will be there soon and it doesn’t look good.
I recently adopted a second dog and named her Lucy. That name is about to be tainted isn’t it? 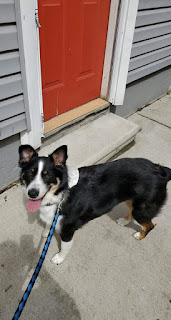 Sophia: I say, let relatives see how you really live. That way, they don’t hang around.
Blanche’s niece is in town for a college interview and Blanche hopes they go well so she’ll live closer. Don’t worry. We’ll never see Lucy again. She’s going to the island of misfit relatives to join Blanche’s grandson, her never featured sons, Dorothy’s brother, Phil, Rose’s mother, and Coco.
Dorothy storms into the room all freaked out over a rat in the kitchen. Thank God, the B plot is here. Rose is close on Dorothy’s heels because it wasn’t a rat, it was a mouse. Dorothy is clinging to Sophia in this scene. I mean CLINGING to her. Over a rat. The woman grew up and lived most of her life in New York. And as we all know, New York City is know for being completely rodent free.
Rose tells a colorful story about a mouse saving her life. Her pet mouse, Larry, could sense it and refused to walk any further one day. Turns out it sensed the damn broke on their walk. It reminds me of Black Beauty saving one of his owners in a rainstorm by refusing to go on when a bridge was out. Except…like dumbed and more St. Olafy. *Drink for Back in St. Olaf*
Thankfully, Lucy spares us anymore of Larry.
Blanche: Let me get a look at you, girl. Mmm, terrific little figure, gorgeous hair, perfect skin. Just like looking in a mirror. Sophia: Get some Windex.
Lucy immediately jumps into a story about meeting a gorgeous doctor on the plane. Sounds like Blanche all right. 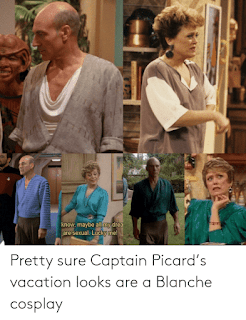 This image just cracks me up...
Lucy wants to go meet her handsome doctor for a date. I recall Blanche’s grandson showed up and immediately left to hangout with some kids at a burger place when he arrived. Must be a family thing. Blanche obviously lets Lucy go because “would your mother let you go?” Who is Lucy’s mother? Charmaine? Virginia? If it’s Virginia, was Lucy tested to see if she could give her mom a kidney? Or is she the daughter of Blanche’s gay brother? He was married to a woman before coming out. We’ll never know.
The next scene opens with Dorothy saying she saw the mouse again. This time in her bedroom. It’s not like any other man is in there.

Sophia’s not in this scene so I had to pick up the slack.
Dorothy is calling the exterminator, but Rose insists she’ll talk to him. If you think she’s talking about talking with the exterminator, you’re dead wrong. She’s going to talk to the mouse, reason with him. She’s a real Mrs. Doolittle.
A distraught Blanche comes in. Lucy never came home! For someone who takes as many lovers as Blanche, this seems awfully naïve. Unless, Blanche never spends the night with men and just gets in and gets out.
Blanche: I’m going to call the police.Rose: Oh Blanche, I’m sure she’ll be fine. I mean what’s the worst that can happen to a 20-year-old girl in Miami?

Lucy comes into the kitchen, no one heard her come through the front door, I guess. She gushes about the doctor taking her on a midnight cruise and she’s in lurv. And she’s gotta get ready for her interview.
Rose: I don’t believe it.Blanche: Neither do I. Imagine, landing herself a doctor, and she still wants to finish college.
Way to promote feminism, Blanche. Rose doesn’t approve of Lucy being out all night with a man she just met. Dorothy doesn’t approve, but isn’t passing judgement. Which, isn’t being disapproving passing judgement? Even if you don’t say anything to Lucy? Also, Rose, remember when you slept with a married man and killed him with your vagina? Pepperidge Farm remembers. Rose asks Sophia if it’s ok to sleep with someone on their first date. Sophia says it’s a sin.
Rose: See, Sophia agrees with me.Sophia: All I said was it’s a sin. Personally, I’d go back to eating fish on Friday if his holiness gave that one the green light.
Next scene Dorothy and Sophia are playing checkers out on the lanai. *Drink for being out on the lanai* Lucy returns from her interview to tell them she won’t be home for dinner. She’s going on a date with Michael. Who is NOT the gorgeous doctor. He’s the guy who interviewed her. 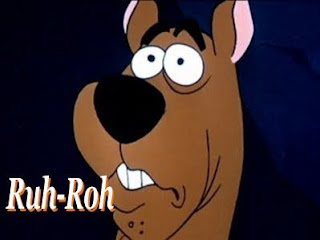 Lucy tells Blanche she thinks she’ll be spending a lot more time in Miami. Couldn’t this interviewer lose his job for promising entry into the university in exchange for sex? I mean, we all know that kind of douche baggery happens, but no one is going to comment on that? Dorothy? Blanche? No one? I’ll remember this when a teacher propositions Blanche in exchange for an A in his class.
Michael is going to fly Lucy to the Bahamas. Of course she doesn’t tell Blanche the guy taking her to the Bahamas is not her doctor lover, but a totally new guy. Dorothy has to break the news to Blanche. Sophia calls Lucy a slut in the most matter-of-fact tone I think I’ve ever heard.
Dorothy: That’s not what I meant. Exactly.
So you kind of meant it? Dorothy is just hanging that you there. She does view Lucy as a slut, but she’s not passing judgement remember? I will say, Dorothy does explain the situation to Blanche without injecting her thoughts on it. She just states facts, without following them up with, “she should be ashamed of her behavior.” But well, she doesn’t approve and we all know it.
Dorothy suggests Blanche talk to Lucy’s mother. And who is Lucy’s mother? Anybody? No? Ok.
Blanche says Lucy has always trusted her and she simply cannot speak with Lucy’s mother. Sophia tells a Sicily story and despite the lack of “Picture it” I’m going to start counting these. *Drink for Picture It*
Blanche waits up for Lucy the next night  and she’s got a guy with her who looks like he’s from Miami Vice. 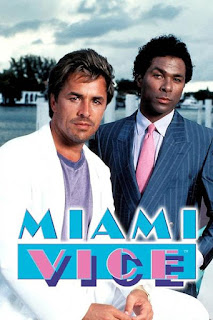 Shady Pines, Ma: Blanche's Beaus: 1Back in St. Olaf: 2Picture it: 1Out on the Lanai: 1Weddings: Funerals: Cheesecake:

September 29, 2019
S01 E11 Original Airdate November 30 th , 1985 This is the third time I’ve started this and the third time when I go to save my progress Word just shits itself. Obviously there’s an issue here that I am not going to fix until this episode is over. There is no problem, only Zuul. We open up with Blanche whistling along with the tea kettle as she and Rose look at brochures. Blanche says they should go to Martinique in the Caribbean because all the men there speak French. Rose wisely asks what the women speak and when she learns everyone speaks French she doesn’t want to go. You know who speaks French? Dorothy. Remember a few episodes ago she learned it and aced her final despite Blanche’s totally disruptive grandson staying with them? No? Only me then? Ok. Rose says she would rather go somewhere like Williamsburg, VA or Washington, DC. Of course this is when Sophia waltzes through the room. Sophia: You’re moving, Rose? This would be touching if I liked you more.
Post a Comment
Read more

June 16, 2019
Picture It: Miami 1985-1992 I fucking love Golden Girls. It is a known fact about me. Coworkers, family members, friends, complete strangers are well aware I love this show. It premiered before I was alive. It ended when I was 5, but I loooooove it. When the syndicated episodes began to air on Lifetime I would come home from school and watch the two episodes they aired. Homework was for nerds. Golden Girls was for winners. I had a friend in high school who would marathon this show with me. In college I would watch late at night, because this term paper can wait, Blanche might sell the house! There are better written shows with way less continuity errors out there, but this is my favorite show. Which is why I am going to rewatch the whole series and share the experience through this blog. And I'm going to make a game out of it. A drinking game, because that's always appropriate. For anyone in the know there are certain repeated aspects of Golden Girls that are pretty we
Post a Comment
Read more

July 07, 2019
S01 E04 Original Airdate October 5 th , 1985 Blanche is in a cleaning frenzy! The house is a pigsty! But as we all know the house looks the same as it always has, except there are a lot more fresh flowers around. Too many fresh flowers if you ask me. All we know is Blanche doesn’t want “her” to come and she just hates “her.” The script writers added tons mystery to the opening seconds of this episode by not naming or indicating who “her” is.  Thankfully Rose enlightens us that it’s Blanche’s sister, still unnamed, that she hates and that is making Blanche's life such a living hell. Blanche: I wish I’d gotten a decorator. Nancy Reagan’s decorator! Inquiring minds had to know, who was Nancy Reagan’s decorator. So obviously I looked it up. His name was Ted Graber. He was born in 1920, served in WWII, and lived with his partner, Archie, for forty years. He died in 2000 at the age of 80. If Blanche did get him to decorate for her, I hope he isn’t listed as collateral lik
Post a Comment
Read more